The Adventure Nextdoor: Gravel grind your way from Geneva to Aix-les-Bains

Somewhere between road cycling and mountain biking, gravel cycling is the ultimate in flexible riding. It has really taken off over the past few years and the Savoy region has some brilliant routes. If you want to gravel bike in the Alps and enjoy some of the best scenery the area has to offer whilst riding these gravel trails, then this is the tour for you!

Our route starts from our office in Gaillard–where we can outfit you with gravel bikes–just outside Geneva. The route begins by heading south, skirting along the Swiss border and winding its way down to Annecy.

After a memorable overnight stay in the quite simply magical Château des Allues you will ride west towards Lake Bourget through Chignin and Apremont, some of the most famous wine growing areas of the Savoy region.

This tour can be combined with our another great option to gravel bike in the Alps: “Newfound Freedom – A gravel micro adventure from Geneva to Annecy,” .

It is a challenging tour organized on a self-guided basis. 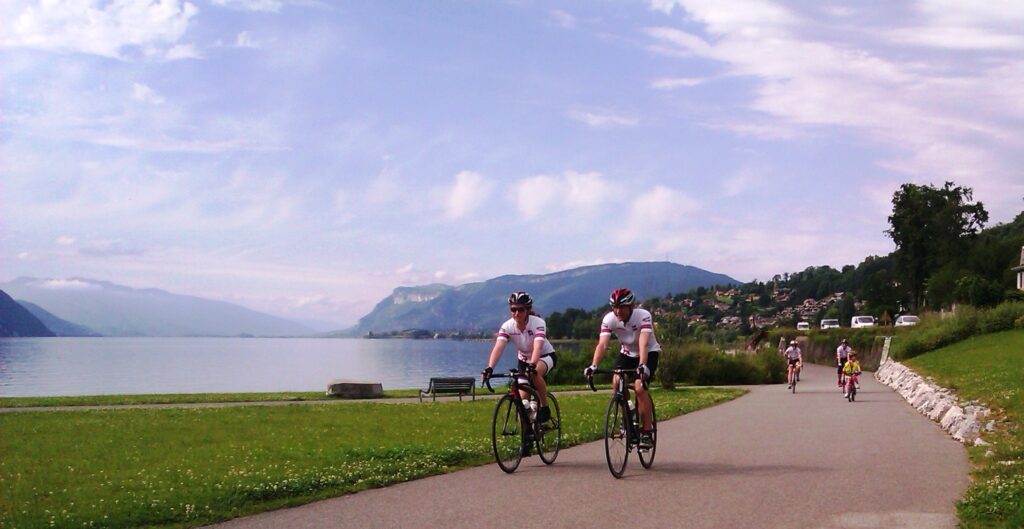 Trip begins in Geneva and Ends in Aix les Bains. Geneva is well-served by train and by air

Self-guided tour available any day from mid-May through October, 2022

Accommodation in a deluxe guesthouse and a 3-star hotel.

Starting at 335 euros per person sharing a double room.

The tour begins in Gaillard just outside Geneva on the French side of the border where our office is located. A member of our team will be there to greet you and outfit you with your bikes if you have chosen to hire with us. The route begins by skirting along the Swiss/French border heading south towards Annecy with Mont Salève on your left. The route is beautifully balanced on a few short single trails (nothing very technical) and a mix of unpaved roads and some quiet country roads. The highest point of the day’s ride is at the Croix de Vin (850m) which gives you an incredible 360-degree panorama over the surrounding massifs.

The ride begins along the bike path which skirts the west bank of Lake Annecy. After leaving the lake behind at Doussard, get prepared for the major climb of the day to Col du Mont Cherel. As well as magnificent views, the reward for that climbing effort is a magnificent descent into the village of Jarsy! The much more gentle final climb of the day begins in Ecole and culminates at the Col du Frene from where it is an exhilarating downhill complete with switchbacks into Saint Pierre d’Albigny. You will stay the night at the magical Château des Allues.

The last leg of this gravel bike route begins with an off-road section taking in magnificent views over vineyards, the Isère valley and the neighbouring mountains as you pass through some of the most famous wine growing areas of the Savoy region! The big climb of the day begins in Saint-Baldoph before descending into Chambéry. You can then enjoy some flatter riding along the popular cycle path “Avenue Verte” following the banks of Lake Bourget to Aix-les-Bains.

From Aix-les-Bains, there’s train service to Lyon, Annecy, or Geneva 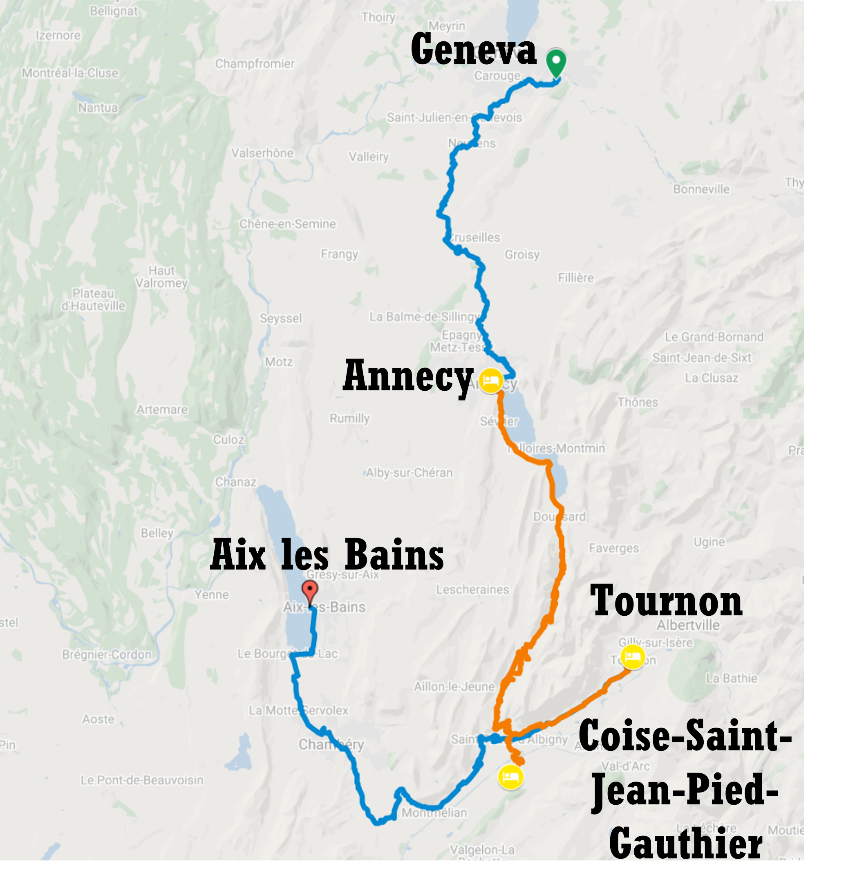 We offer this tour for individuals on May 14 and September 9, 2021.
On any dates for groups of 4 or more

With a support vehicle and riding staff

What's Included In Your Price

Not Included In Price

Wish to gravel bike in the Alps and know more about this tour? Complete the form below for a detailed description with route, mileage, and profile information, plus a list of hotels