Lake to Lake: Around the Bauges from Culoz to Annecy

This is an abridged version of one of our most loved tours and makes the perfect weekend escape. If you want to explore the Alps by bike without the hills and enjoy the magnificent Lake Bourget and Lake Annecy then this unique tour is the perfect two-day trip for you. The route stretches alongside both lakes and essentially follows river paths along the Isère so you can enjoy the sights of the towering mountains, without having to climb them! Along the way the ride takes in historic villages, stunning natural scenery, lush meadows and valleys as well as picturesque peaks.

The tour begins in Culoz on the northern tip of Lake Bourget and heads out along the banks of the lake towards Aix-les-Bains. After a memorable overnight stay in the quite simply magical Château des Allues the route then heads north and continues alongside the stunning Lake Annecy before arriving into Annecy itself, nicknamed the ‘Venice of the Alps’.

Don’t forget to pack your swimsuit for a quick dip in Lake Annecy before heading home!

Trip begins in Culoz and ends in Annecy.

This tour is offered on June 5th, August 21st, and September 18th, 2021
it can be organized for private groups of 4 or more on any dates from March through November, 2021.

Daily cycling distance ranges from 69 to 79 km between options of varying challenge.

Accommodation in a deluxe guesthouse.

Starting at 250 euros per person sharing a double room.

Arrive into Culoz in the morning where you will be met by two members of our team who will outfit you with your bikes if you have chosen to hire with us. Culoz can easily be reached by train from Annecy, Geneva and Lyon (journey’s take between 1 and 2 hours).

The day’s ride sees you set off by pedaling along the banks of Lake Bourget and then continuing through the heart of Savoy to Chambéry, a town renowned for its art and history. Located in a wide valley between the Bauges and Chartreuse mountain ranges and at the crossroads of ancient trade routes, the old-town section of Chambéry is one of the most remarkable in France. The day ends at the magical Château des Allues where you can enjoy a well-earned rest ready for the next day in the saddle.

The Isère River guides the route to Grésy-sur-Isère, a largely agricultural community that has been inhabited by man since the Neolithic Age. Along the way, take in the ruins of the 10th century fortress, Chateau de Miolans, which overlook the rich wine-growing region of the Combe de Savoie valley (including the village of Chignin, with remains of the 8th century Sarasin stronghold and its 6 towers). Head on to Albertville, situated on the Arly River close to the confluence with the Isère River. Albertville hosted the 1992 Winter Olympics and has become quite an industrial center, but it also encompasses the medieval town of Conflans, whose buildings date back to the 14th century.

The Beaufortain and Bauges Mountain ranges will dazzle you as you cycle to the stunning Lake Annecy (Lac d’Annecy). The Aravis mountain range reigns over Europe’s cleanest lake; its heights are famous for the hairpin turns and steep bends in the Tour de France. The tour ends in the magnificent town of Annecy, nestled on the northern tip of Lake Annecy. It has earned the nickname the ‘Venice of the Alps’ as canals cut through sections of the historic Alpine-style village. Enjoy a swim in the lake before heading back home! 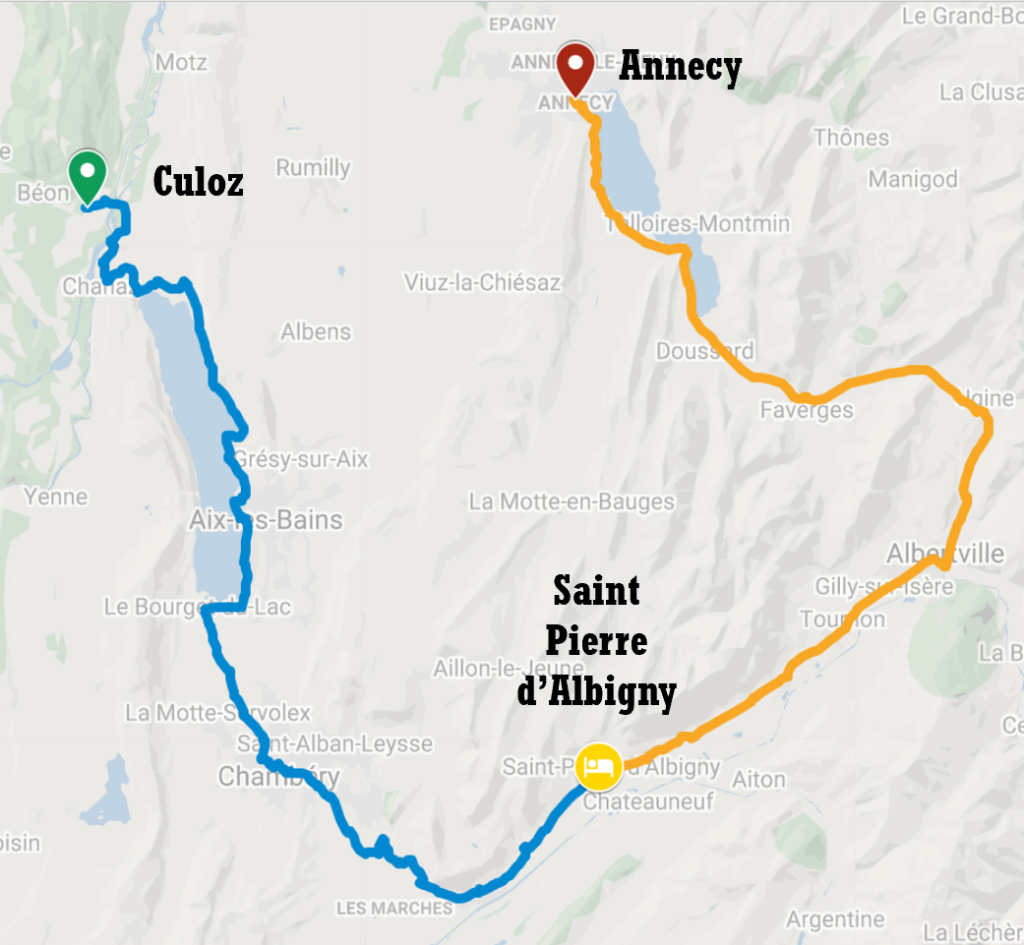 1 night in a deluxe guesthouse

With a support vehicle and riding staff

1 night in a deluxe guesthouse

What's Included In Your Price

Not Included In Price