Do you love cycling and exploring new areas by bike, but think the Alps is beyond your reach, because of — you know — climbing all those mountains? Are you more of a leisure cyclist than an avid “col”-climbing animal?

Then look no further, this trip is for you!

This unique Alpine tour makes it possible for leisurely riders to experience the captivating cycling routes of the Alps without the hassle of hills. Linking the three major lakes of the area (Lake Geneva, Lake Bourget, and Lake Annecy), the cycling routes essentially follow river paths along the Rhône and Isère rivers, taking in historic villages, stunning natural scenery, lush meadows and valleys, and picturesque peaks along the way.

Pack your swimsuit in case you can’t resist the call of the lake (or all three lakes) and the thermal baths of Aix-les-Bains! Just don’t go extinct like the poor bezoule of Lake Bourget!

Trip begins in Geneva and ends in Annecy. Geneva is well-served by a wide variety of premier and budget airlines.

Self-guided tour available May through October 2020. Starts any day of the week.

Accommodation in 2- and 3-star hotels and one charming guest house.

Starting at 560 euros per person sharing a double room.

Arrive in Geneva at your leisure and check in at your hotel. Take time to discover this stylish city on your own. It’s a gem of international organizations, finance, and culture, meshing Old World with new, and is a delight to explore. The crescent-shaped Lake Geneva (Lac Léman) is a wonder to behold and provides photo fodder. Dinner is at your leisure. Since Geneva is the culinary capital of Switzerland, you’ll find a variety of restaurants and eateries sure to please every palate.

Meet our local rep in the morning for the bike outfitting and itinerary briefing. The highlights of your route include cycling along the infamous Rhône River, admiring the views over the charming wine-making villages of Dardagny and Satigny, and frolicking around forts. Conquer the westernmost point of Switzerland by bike at the village of Chancy and then cross the border into France. Do not miss the Fort de l’Ecluse, an elevated fort founded by a Duke of Savoy. He built it out of a striking rock formation, which forms a natural entrance for the Rhône Valley into France between the Vuache hills and the Jura.

Your home for the night is in Seyssel, a small “double-town” in both the Haute-Savoie (Upper Savoy) and the Ain departments on the Rhône River located between two dams.

The views on today’s ride — the 14 summits of the Bauges mountain range on one side, as well as Mont de la Charvaz and Col-du-Chat on the other — are some of the major highlights of this tour. Sheer cliffs seem to spring up magically from the water and the mountains surround you in protective peacefulness. Lake Bourget (Lac du Bourget) is the largest natural lake of glacial origin and the deepest entirely within France. It was home to the now extinct Bezoule, a freshwater whitefish that fed at muddy depths of 70 to 80 meters (230 – 260 ft) and reportedly disappeared in the 1960s. Cycle past the impressive site of the medieval Château de Montverran in Culoz, which was built on a rock in 1316 and, in more recent times, inspired the likes of the Russian composer Sergei Prokofiev. Pedal on to the spa town of Aix-les-Bains, which was known for its baths as far back as the Roman Empire. You can discover the numerous Roman ruins that remain.

You’ll also have the option to take a “bikeboat” (to be clear, it is a boat with space for bikes; no need to pedal to get the boat moving!) across the Lake, from Conjux to Aix-les-Bains.

This option is subject to availability: on Sundays only from May to mid-July and in September;

on Tuesdays, Thursdays, Saturdays and Sundays from mid-July to end of August.

Both options offer spectacular views of the lake and surroundings!

Day 4: Aix-les-Bains to Tournon or Saint-Pierre-d'Albigny

Today you’ll pedal through the heart of Savoy to Chambery, a town of art and history. Located in a wide valley between the Bauges and Chartreuse mountain ranges, at the crossroads of ancient trade routes, the old-town section of Chambery is one of the most remarkable in France. Along the way, take in the ruins of the 10th century fortress, Chateau de Miolans, which overlook the rich wine-growing region of the Combe de Savoie valley (including the village of Chignin, with remains of the 8th century Sarasin stronghold and its 6 towers). The Isère River guides the route to Grésy-sur-Isère, a largely agricultural community that has been inhabited by man since the Neolithic Age.

Day 5: Tournon or Saint-Pierre-d'Albigny to Annecy

Roll your way to Grésy-sur-Isère by way of Albertville, situated on the Arly River close to the confluence with the Isere River. Albertville hosted the 1992 Winter Olympics and has become quite an industrial center, but it also encompasses the medieval town of Conflans, whose buildings date back to the 14th century. The Beaufortain and Bauges Mountain ranges will dazzle you as you cycle to the stunning Lake Annecy (Lac d’Annecy). The Aravis mountain range reigns over Europe’s cleanest lake; its heights are famous for the hairpin turns and steep bends in the Tour de France.

The magnificent town of Annecy, nestled on the northern tip of Lake Annecy, might remind you of Venice — canals cut through sections of the historic Alpine-style village. Strolling around, you’ll encounter the Palais de l’Isle (12th Century prison on an island, the town’s symbol), the Chateau d’Annecy, the 16th century Cathedral of Saint-Pierre, and the 20th century Pont des Amours (Lover’s Bridge) made of iron.

Have a relaxing breakfast, enjoy more of the sights and sounds of Annecy, and depart at your leisure.

Or, feel free to prolong your stay in Annecy in order to make the most of this extraordinary town and setting. 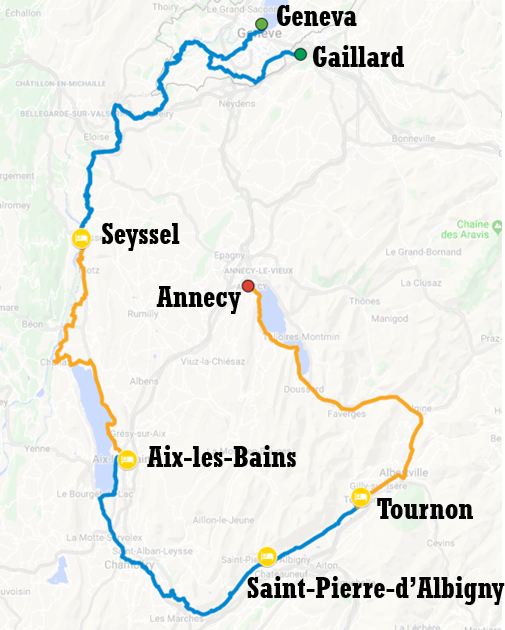 3 nights in 2-star hotels, 1 night in a comfortable guesthouse, and 1 night in a 3-star hotel (in Gaillard, just 7 km/4 miles from the center of Geneva)