This six-day, self-guided bike tour allows you to explore the heart of Provence at a more challenging level than other tours of the region with a Ventoux and Luberon cycling holiday.

Beginning in Bédoin and ending in Gargas, the itinerary features relatively short daily rides, allowing you to fully experience Provence rather than just see it as you pass by. With options to climb legendary Mont Ventoux, or snake through the Gorges de la Nesque, some of those views will be your reward for pedaling all of those kilometers!

Highlights include visits to some of Provence’s most acclaimed wine-making towns (Vacqueyas, Gigondas, Beaumes de Venise), stops in several of France’s “most beautiful” villages (Séguret, Gordes, and Roussillon), and options to climb legendary Mont Ventoux or snake through the Gorges de la Nesque. Each night, you’ll stay in comfortable, character-filled hotels set in utterly charming towns.

Trip begins and ends in Avignon.

Self-guided tour available May through October 2020. Starts any day.

Daily cycling distance ranges from 35 to 80 km with many alternate paths and challenge options.

Starting at 750 euros per person sharing a double room.

Arrive in Avignon at the time of your choice. An early arrival will allow you time to visit the ancient city of Avignon and its highlights, such as the Palace of the Popes, located a few minutes’ walk from your hotel.

Day 2: Transfer from Avignon to Bédoin. Loop or ride to Mazan.

Our taxi partner will transfer you to Bédoin where you´ll be outfitted with your rental bike. If you have the time and inclination, you may ride a loop around the fabulous Dentelles de Montmirail (a vertebrae of dramatically jagged mountains). Your toast-giving skills may come into play during today’s loop. You’ll wheel through some of the most noted wine-making villages in Provence, starting with Beaumes-de-Venise. From a scenic spot at the foot of the Dentelles de Montmirail, this old-world village is home to Muscat de Beaumes de Venise, one of the world’s most celebrated wines. Vacqueyras is next, followed by Gigondas and then Séguret, which lives up to its hype as one of France’s “most beautiful villages.”

As your loop begins to bend around, you’ll pedal into Vaison-la-Romaine. Divided by the Ouvéze River, Vaison-la-Romaine’s lower half features a trove of Gallo-Roman ruins, making it one of Europe’s largest archaeological sites, while the upper half, perched atop a knuckle of rock, rates as a monument to medieval architecture.  Before reaching Mazan, you’ll have the option to ride up to the tiny village of Suzette (1,080 m/3,540 ft), a modest ascent that, if you so choose, will add 20 km (12 miles) to the day’s ride. If you arrive too late or don’t feel like doing the loop, you have the option of riding the 10 km from Bédoin to Mazan.

Depending on preference, you’ll have the option to climb Mont Ventoux, the “Giant of Provence,” or go a more leg-friendly route through Gorges de la Nesque. The first option allows you to climb a classic route up Mont Ventoux, which summits sky at 1,912 meters (6,273 feet). This barren peak enjoys all-star status with riders, having appeared in the Tour de France 15 times since 1951. The second option corkscrews along the floor of the Gorges de la Nesque and averages, by our count, 11 picture-stops per mile (14 if you visit the Chapelle Saint-Michel, a tiny, 12th-century chapel tucked under a cliff). You’ll stay in Sault tonight, a tiny village that’s as historic as it is beautiful. Surrounded by fields of lavender, your ride around Sault could resemble an unframed Monet painting in 3-D (depending on the time of year).

Today’s ride allows you to experience Provence at its rural best. You’ll wheel across rolling green hills and through timeless villages hemmed with vineyards and fruit orchards, the type of decaffeinated setting that causes sound-minded people to ponder quitting their jobs, moving to Provence, and spending their remaining years in sun-drenched fields applying oil paints to canvas. The village of Venasque, designated one of France’s “most beautiful villages”, is one of the ride’s highlights. Fontaine-de-Vaucluse will be your home for the night. Huddled at the foot of the Vaucluse Mountains, Fontaine-de-Vaucluse features the fifth largest underground spring in the world. Against a backdrop of craggy cliffs and draping foliage, the spring’s emerging turquoise-colored waters are extremely camera-worthy.

Day 5: Fontaine-de-Vaucluse to Roussillon or Gargas

It won’t take long for the day’s wow-factor to kick in when you ride into Gordes. Perched atop a hillside, it is one of France’s 144 “most beautiful villages.” Ancient stone buildings line its many narrow cobbled alleyways and arcades, all of which lead to the Chateau de Gordes, the village’s iconic landmark. Nearby Sénanque Abbey, located below Gordes, is worth visiting as well. From here you’ll bicycle through a chain of scenic, hillside villages – Menerbes, Lacoste and Bonnieux – before reaching Roussillon, yet another of France’s “most beautiful villages,” which once served as home for writer Samuel Beckett. At night you’ll be able to upload all of today’s photos onto Facebook from your hotel in Roussillon (Opt A) or Gargas (Opt A+).

After breakfast, our team will transport you to the walled city of Avignon. From there, the rest of France is only a train ride away. 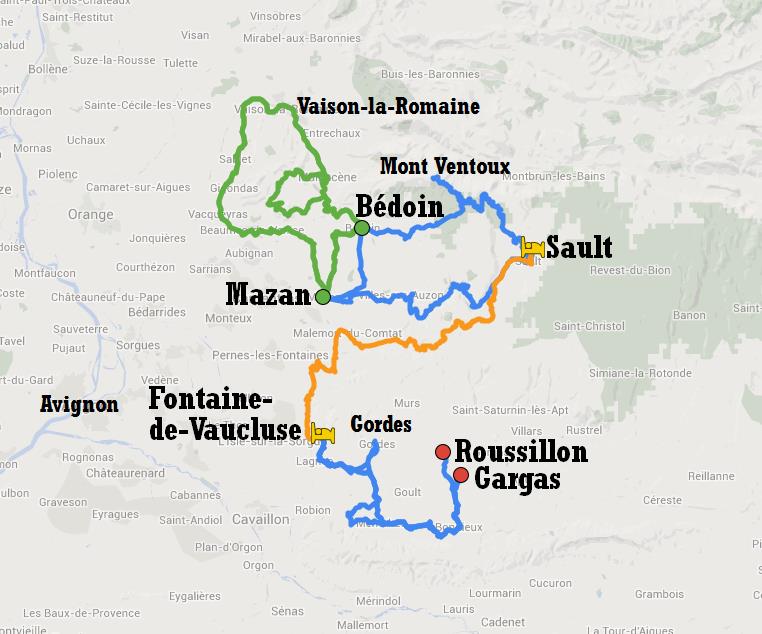 From 1,150 euros per person sharing a room (single supplement is 695 euros)